Tapping the potentials of underutilized space below the elevated Metro Line The elevated transportation corridors have become an essential part of every city. They have a huge role to play in the image creation of every city. While the city is rapidly advancing, do we have a clear vision for the land that will be created below these elevated corridors? Many terminologies have been coined by the international activists to address this high value space in the city centers.

The maintenance of these underutilized spaces in terms of safety, security, and cleanliness has become a challenge to the city authorities. Through systematic research, the authors have tried to explore the potential possibilities of commercial use of this space under the elevated corridors. Various part of the Delhi Metro and Noida – Greater Noida Metro Line has been used as the sample instrument for the study.

To study the dimension of the space the Noida- Greater Noida Metro line was documented. On a standard Indian Gauge track, the width of the overhead bridge is 9m which is at a height of 9m, in most scenarios. So literally there is an 8.5-9 m clear width of space enclosure (including the pillar), that is running linearly trough the city. The continuity of the space is broken by the metro pillars at every 30 m. This 30 m stretch is mostly unused or partially used at the Noida- Greater Noida line.

Out of the x volume of space that is available between the two pillars, 60% of it can be converted into a built volume and keep the remaining 40% volume as an unbuilt volume. Out of the 60 % of the built volume, 20 % will need to be dedicated to a vertical circulation. The remaining volume available to us would be x cu m, which can be converted into z sq m of usable area on two different levels (including a mezannine). 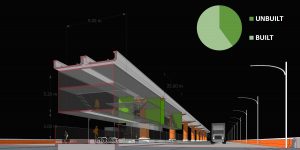 This module, arrangement of space between the two metro pillars, can be multiplied to form a continuous spine of functional spaces which can bring in advantage of easy accessibility from the metro stations.

The 40% unbuilt volume can be transformed into an alternative transport spine for example, cycle and battery cars can be incorporated to reduce the congestion on the major network spine and reduce the pressure of last-mile commute.

3. Devising the Typology of the Spaces Below Metro Lines

Spaces in Between are the spaces that are right in the middle of the road traffic. These spaces has a higher level of interaction with the road commuters hence these spaces has high commercial values. These spaces have the potentials to be planned as an urban hub or a city centre with the major administrative / government hubs that needs to be highly accessible through the metro spine. 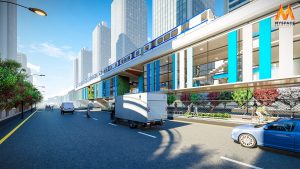 Spaces Aside are spaces which are created alongside the road with the advantage of having an existing overhead roof structure. These spaces which are suitable for both metro as well as road commuters can be put into multiple uses like stack parking, high street commercials, waiting lounges, bus shelters etc. These spaces having an elaborate frontage, opening into the major road offer them a high visibility and can be suitable rest areas or break out spaces for the road commuters. 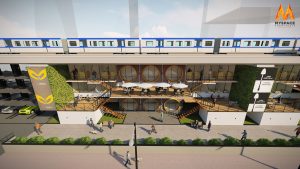 Spaces Across are spaces having a direct vision from the road traffic. They have a potential to create views and vistas in the city. And hence need to be treated carefully to be aesthetically pleasing as well as functional. There can be interactive display boards and product displays to enhance the experience of the road commuters. Waiting hours in the traffic block can be made less stressful by such product displays and interactive boards. Use of vibrant colours and lighting can also improve the ambience of the space. 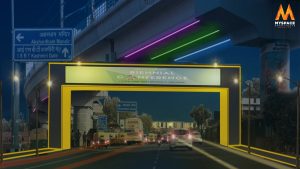 Spaces Around are spaces having a varying nature depending on its locality, for example it can be green areas, vacant land or along a drain. But the kind of cosy space created with existing shade and being away from road traffic, creates a sheltered space by itself. If the spaces can be developed to its suitable potential that can be suitable for social activities like informal day school, small scale industries, artist village etc. 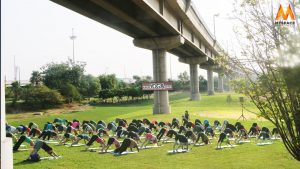 The possible usages identified by the author have been listed out and at the same time, there can be other possibilities too, depending on the needs of the locality. The authorities, urban development agencies, and specialized consultancy firms can be deployed to identify and suggest need-based solutions to the ever-evolving cities. While at the same time a standard guideline to identify and develop the underutilized spaces within the cities would create a well-planned city for the future.